We thought summer weather was hot, but certainly we were not ready for what Copenhagen Fashion Week had prepared for us. All the burning vivid colours, layers (we do not envy all the models wearing spring coats though) and shapes made us dreaming of the next warm season already. And if you are not ready for some 90’s comebacks than you have half a year to make your peace with it because the fashion of spring/summer 2019 is going to be all about the leisure outfits, cowboy boots and bright colours.

The sisters Anne Louise Faurholt and Emma Lohmann’s spring/summer 2019 collection was presented at one of the fashions weeks best locations, a yacht garage. Surrounded by yachts in every size, the sisters managed to create a collection containing elements of pastel colours, flower prints, and stunning pieces with fake-fur details – they truly have the Danish spirit and know how the Scandinavian women dress.

We felt taken down memory lane to the classic 90’s movie Clueless, and the sisters must have been inspired by Cher’s most iconic outfit, the checkered pleated shirt and matching yellow blazer and the small details, such as allowing us to wear socks with high heels.

Designer’ s Nest is one of the highlights we are looking for every year since the inspiration is countless. Six designers from the best fashion schools that Scandinavia has to offer got together and created an extraordinary show.

Kristine Blad, who placed third in the competition, with her collection of layers and vibrant colours has broken our Scandic vision of black and white fashion. Of course, we are still loyal minimalists, but these colours just get under your skin. With a lot of red and green, we are saving this collection to our autumn wardrobe selection. 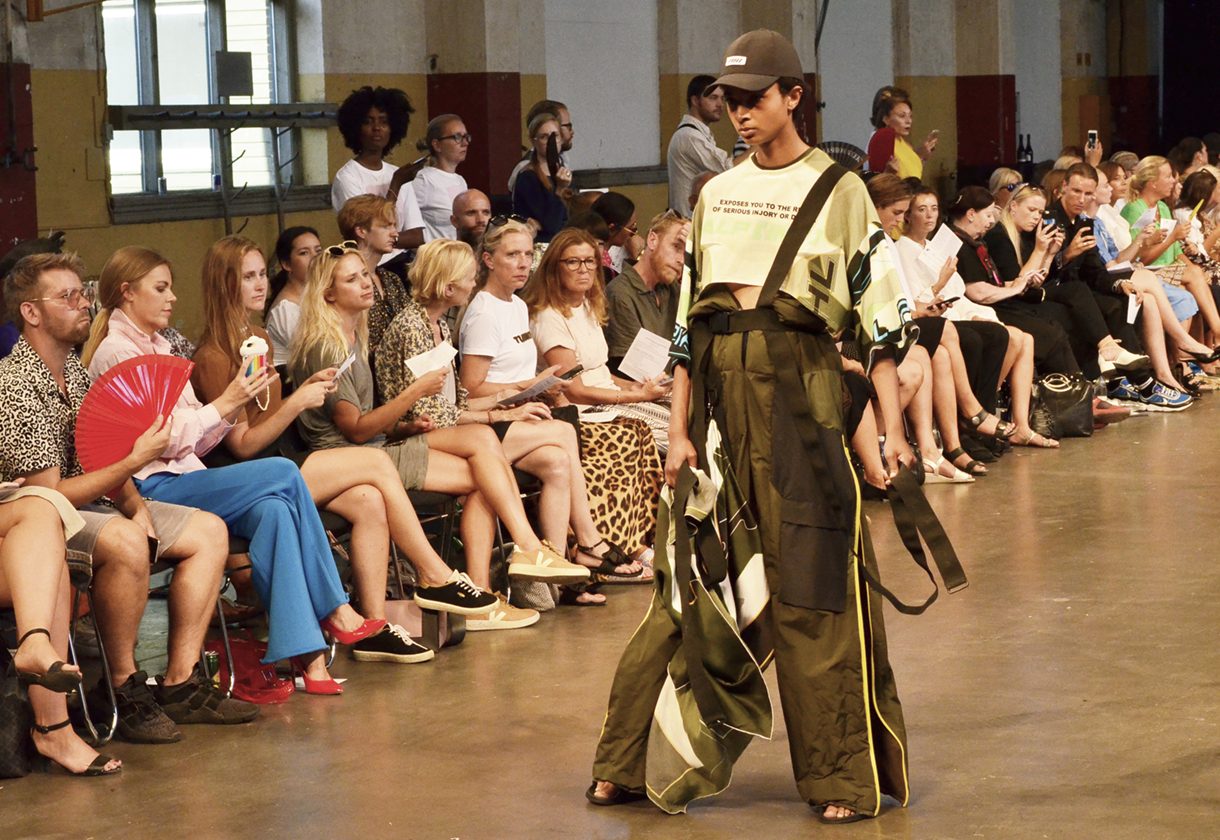 The second place was a real explosion of shapes. Stina Rand’s collection was definitely in spirit of vibrant colours of summer, and even though we admit we would not be bold enough to pull these off, we are clapping to everyone who dares to.

Nevertheless, the first place is definitely where the judges’ and our fashion sense had a meeting point and settled for Marie Sloth Rousing’s collection to blow our minds away. Rousing, who just recently graduated from the Royal Danish Academy of Fine Arts, created a collection that definitely fits into UPTOSTYLE’ s perception of what spring and summer clothing of a Scandinavian fashion obsessed minimalist should look like. Layers, shapes, asymmetric, colourful yet minimalistic. This was love at the first sight!

August 08 – Fashion with a message

With seeing so much fashion collections changing right in front of you during the fashion week, you start searching for switch, something to spice it up. MUF10 definitely gave us a wake up call, starting the second day of Copenhagen Fashion Week with the strongest message. Because the fashion is not only about looking pretty and put a brand on clothes. Fashion is one of the strongest ways to react to the current affairs and make a statement which will resonate with people for a long time after the show is over.

If you are aware of the news, you for sure noticed the questionable Danish law which came into force on 1st August, banning the pieces of clothing which cover faces, including Islamic veils such as burqa and niqab. Following the protests in the streets of Copenhagen on the day, MUF10 leaves a strong message not only with its line inspired by islamic fashion, but also with the full show that they put together which captured moments from the protests, particularly the striking moment when a female police officer embraced an Islamic woman wearing niqab covering her face during the protest.

Even though we saw many shows after, MUF10 really left a mark on us.

A little bit of industrial setting with sporty fashion show, that is just what we liked after the spicy beginning. The second day welcomed us into Fashion Week in a full swing.

J.Lindenberg showed a collection fully inspired by street wear and left enough space for ugly sneakers to be in the spotlight. Very fashionable and extravagant, and yet still the brand was able to keep classy shapes and very clean lines.

Morten Ussing’s spring/summer 2019 collection made you feel as if you were standing in a field on a warm summer evening. The models came out onto the catwalk wearing white flowing dresses, as a soft cover of Radioheads song ‘Creep’ started playing in the background.

Morten used elements such as straw to create a beautiful contrast of texture and colour. It was a  breathtaking experience seeing the models walk down the catwalk with flowing dresses in spring colours that were mixed with large yet simple hats and bags made out of straw. Strong colours, such as mustard yellow and palm green were later introduced and beautiful and authentic flowers appeared on several dresses and added a unique touch to the collection.

With high-waisted pants and skirts, with matching tops, single strap dresses with beautiful nature-inspired print on, we want nothing more than to add all these items to our personal wardrobe. It is inspiring how well the brand understands and knows how to bring and create soft items but transform them with a harsh contrasts, in order to suit almost any wearer. This brand is simply easy and beautiful and we wouldn’t want it to be anything else.

Han Kjøbenhavn’s spring/summer 2019 show was hold in an old and dusty warehouse and it was an evident comment, from the designers, on how society is today and how it compares to when they were growing up. This showed itself in many of their pieces, as you can spot the floral-needlepoint-fabric that easily reminds us of our grandmothers couch. Like previous collection, the designers have not held back from exploring and using alternative materials such as combining brown leather with denim on one item and using mesh and tarp for bottom pieces.

Launched as an eyewear brand in 2008 by the good friends, Jannik Wikkelsø Davidsen and Tim Hancock, it didn’t take very long until the brand expanded to apparel just the following year. Aimed to tell a story with their company this is not the typical “polished” Scandinavian fashion we might be used to. To them, their collection is a reflection of their surroundings, where they are from and what many fear to express. Han Kjøbenhavn is a beautiful clash of classic and modern. There is a deep foundation of Danish aesthetic and mixes it with little quirks that frees them from the “standard” model of fashion and design.

August 09 – A splash of colours

So we were not sure for a while, but after the Munthe show, we are more than certain that cowboy boots are back!

This is definitely a collection we dare and want to try on tout de suite. Munthe managed once again to transform the core message of their brand into their collection, which is never missing during Copenhagen Fashion Week.  Classy feminine shapes, beautiful vivid colours, flowers and glitter. All that we love. Munthe went into details, taking care of their guests at a beautiful location in the Royal Danish Playhouse by the Copenhagen canals, cooling down the heat with ice coffees and Japanese hand fans.

The spirit of the brand is fresh and chic while having a great understanding and respect of each women’s personal style. There is always room left for expression for each individual style. There is a high attention to detail and high quality in each piece.

This season is filled with a simple colour palette, yet mixed with mustard yellow and baby blue. It amazes us how a collection understands the value of the femininity so well and makes almost any minimalist to wear their collection, even though the brand has never claimed to be a minimalistic brand. They used quality fabric, both heavy and light, and stripes soft pink floral patterns and to create a contrast they paired them with plastic fanny-packs, decorated with little daisies and ratchet straps as belts.

Well, this fashion show definitely had us at hello. HALO put together a fashion show on the shore of one of the Copenhagen’s canals and pulled a great deal of attention since the very beginning of the show as entering the runway from the waterside is particularly unusual a overwhelming in the best meaning of the expression.

The brand’s athletic collection worn by professional athletes made the clothes stand out perfectly and painted a really vivid picture of how the sportswear should look like. Moreover, we love the deal of attention Halo paid on the footwear. If you haven’t read outr article on Ugly Sneakers, you should do so right away here because you will obviously need them, as they are not going out of style yet.

Let’s just be honest, sportswear has never looked so good and refreshing before.

On this sunny afternoon, going strong on three days of fashion week, Designers Remix made sure their show would be on everyone’s lips for the rest of the day. Taking place at Under the Crystal, a beautiful and aesthetic space between an office space and parking garage, the sides and top of the space was covered in reflecting metal,  it created stunning and raw edge to the presentation.

With sustainability in mind the Danish CEO and brand designer, Charlotte Eskildsen, approach is very intional in every aspect of the design process. She values high-quality materials, using sustainable and re-usable fabrics that benefit the environment. Designers Remix deserve a round of applause by demonstrating that it’s not difficult to make something “sexy sustainable”.

The show started out by presenting a softer side of the collection, white flowing bohemian-inspired dresses, followed by earthly coloured dresses and oversized blazers. A subtle shift happened and models walked in wearing strong blue and pink coloured mini-skirts, blazers and layered evening dresses.

Luckily we got to see a great deal of this collection backstage, which always brings a very different perspective on the whole show. And may we just say how much admiration we gained for the models dealing with this crazy Copenhagen heat-wave with grace.

We love that Heliot Emil, as promised from their reputation, really took details to another level and not only when it comes to fashion, but to beauty as well,  as they completed each outfit with perfectly fitting hairstyles and make-up.

One of the most hyped Danish brands on the market took an idea of functionality and replaceability, and transformed it into a collection that was a vision of monochrome industrial style and futurism. They complemented the clothes with Japanese manufactured hardware accessories to finish of the collection with an extra twist.

Last runway show was taken by Saks Potts, a fashion show accompanied with a rich program. The dancing performance opened the evening in the Idrætshuset hall and the following fashion show was opened with a beautiful night gown and continued in the same impressive spirit.

Saks Potts brought a whole spectrum of colours into their spring/summer 2019 collection and yet kept in mind the classic shapes and silhouettes of a woman’s body. Their significant emblem has been present on number of models from their collection along with various other shapes. So next season get ready for layers, shapes and colours because that’s the read thread through this years fashion week.